A Painting update, and some WIP's

Although things have been quiet in Blagovia, Nabburg has been busy of late.
So far I have done 3 companies of Leutonian musketeers (8th MR, (LaRue), and 3 companies of Nabburger Grenadiers (GR1), and I am well on the way to finishing a battalion of Nabburg fusiliers.
I am very happy with the painting, but the miniatures, even though they are well sculpted, have horrible mould lines, flash and even cavities. A shame really, because had they been moulded better I would have purchased several more boxes and completed my two armies in 1/72.
When I started these units it was primarily done for two reasons: as a test canvas and as a means of gathering some troops to wargame with in an area of limited space. Keeping these two points in mind I approached the clean up with a "good enough" attitude. Now that I can see what the units look like painted up, I will start to get some Minden and RSM95 miniatures and start creating my Nabburg and Leutonian forces in 30mm.
As an aside, one thing that became evident after I took the pictures was that the Grenadiers really need some touch ups on the eyes and  mustaches, and the rough edges along the legs and arms are not noticeable at normal viewing, let alone from 3 feet..

Big changes at Festung Borislav. Well I finally reached my limit, and as my nephew used to say when he was a kid: "Enough is enough!" I have recently been painting up a storm, primarily 1/72 HaT Prussians as Nabburgers and Leutonians, and my painting bench has reached saturation. As a result of this, a couple of weeks ago my painting ground to halt. It did so because I spent 20 minutes looking for a colour, only to find that it was right in front of me,  buried and hidden behind another pot of paint. This was the proverbial final straw. It gave me the impetus to finally finish my study/library/painting bench. Located in a corner of the basement that is the coolest in the summer and the warmest in the winter, it promises to be sanctuary from the chaos of the world. Although not quite all done yet,  the shelves that will hold my paints are drying in the garage as I write this, and my books need to be taken out of the boxes, where they have been stored for some time, and arranged on the shelves (not visible in the pictures). All in all I am extremely happy with my efforts. I really think that the clutter and disorganisation was part of the reason that my painting output is so slow and erratic. Sometimes it's hard for me to get motivated when I have to spend several minutes clearing a suitable space and putting the required colours at hand. Too often I just walk away and find something else to do, instead of going through this routine! It also didn't help that my painting area was squeezed into the furnace/laundry room   Once everything is ship-shape and Bristol fashion I will post all of the finished results. In the mean time, some pictures to illustrate the before and after.
One thing that the picture doesn't show is how small my old painting area was. It only measured 2'x3'.

Posted by Vladimir odBlagovia at 04:45 4 comments:

In keeping with the Nabburg theme of late I have decided to post some uniform plates. The Nabburgers use Prussian style uniforms, with the national colour being orange. The uniform templates are, of course, from Not By Appointment, re-coloured with MS Paint. I will soon post some of the painted units from these regiments and battalions that I gave completed thus far.

Work has been busy of late, so very little painting has been done thus far. The few hours that I have been able to to go to the painting bench have been very productive. I have almost finished my last company of Leutonian musketeers, and Nabburg Grenadiers. Only a couple of hours to get them done. I have also primed, and painted the faces and hands, and outlined my 6 companies of Nabburg Fusiliers. Still not sure what colours I will use for them, but they will be the next ones I start when I finish the Leutonians.  What I like to do is use the Vallejo Grey Primer and as a base coat, and then use some GW Nuln Oil to give the miniatures a quick  wash. This has the benefit of a providing some nice shadows, and wonderfully delineating the various accouterments that the miniatures have.


Posted by Vladimir odBlagovia at 06:35 No comments:

In keeping with the Nabburg theme here are some flags that I have come up with based, in some cases, on historical examples: 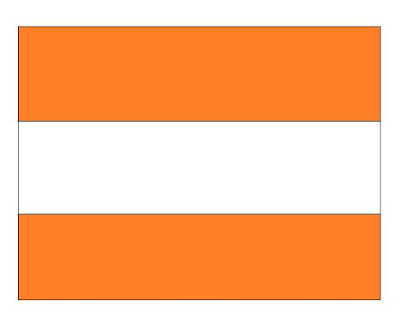 Rarely carried into battle, it is sometimes used by Jäger Battalions in an unofficial capacity, as they don't usually carry colours. 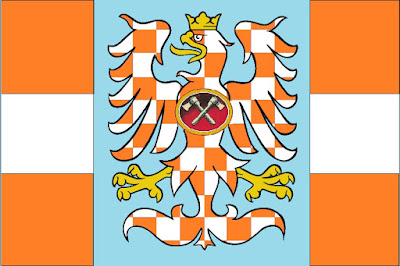 Since the Grenadiers are organised into a single regiment, and not dispersed amongst infantry regiments, they have their own regimental colour (Kompaniefahnen).

Nabburg infantry regiments carry the same flag, with their particular regimental number stitched to the bottom of the flag.

The Nabburg Artillery Corps (Artilleriekorps) were given their colours only recently, and they signify the importance that Duke Heinrich attaches to this branch of service.

Posted by Vladimir odBlagovia at 19:49 2 comments:

Things have been quiet in Blagovia, with His Grace enjoying the summer at Maison de Jardin, the official ducal country home. The autumn promises to be busy with more troops arriving in Blagovia, specifically a battalion of Battenburgers that have been retained by His Grace's agents for a two year contract. They are due to occupy the North Barracks, which are currently being repaired. Rumour has it that the Blagovian Dragoons will also be re-established.

Nabburg, on the other hand has been very busy of late...

With the discovery of my old Nabburg map a few weeks ago, my painting efforts have largely been focused upon this nation, and have been proceeding a pace. Having recently purchased 1 Hour Wargames by Neil Thomas, I got a real urge to try out some of the scenarios presented in the book, using Nabburg and Leutonia as the primary combatants.  With a true scarcity of 18th Century wargamers in these parts, and thus an obvious lack of opponents,  the "1 Hour"  rules provide an excellent venue for solo wargaming. Having already played a few scenarios using cardboard chits I was eager to try them with miniatures. The rules, although simple, are easily tweaked to suit one's taste, work well and are a fantastic way to have a quick wargame in the evening. They hearken back to a much simpler time in wargaming, and I heartily recommend them.

As of today I have completed the following:

1 company for the 2nd Battalion, 8th Regiment
Command Stand 8th Regiment
1 Battery (6 pounders)
Artillery crew
I also have 1 squadron of Hussars to paint, but I am not sure if they are going to be Leutonian or Nabburger.

I have been using the HaT 1/72 Prussians for the bulk of my forces, and they have been a pleasure to paint. My only "beef" with them is that the mould lines on some of them are brutal and I haven't found a way to adequately clean them up. In the past this would have killed my momentum and enthusiasm for the project, but I have recently been far less concerned with such things and the results speak for themselves. I will post pictures as soon as the bases are dry.  Hopefully by next weekend I can post some battle reports!
Posted by Vladimir odBlagovia at 18:58 No comments: