Finally, I have gotten around to posting some finished units. These are painted in the colours of the Blagovian 1st Infantry Regiment (1-ви пехотен полк), 1st Battalion which, coincidentally, happen to be the same as the Royal Hungarian IR. 52 "Bethlen."
Not my best work, but I am happy with the results. They are certainly fine enough for the table top! The only thing that I will do before pressing them into service will be to add some flock to the base, and a flag for the Command Stand. Not too thrilled with how the eyes turned out on the grenadiers. I was going to paint the eyes for all of the miniatures, but having had second thoughts after seeing the grenadiers I think that I will stay with just a suggestion of eyes. Besides, I really don't think that they are that noticeable at 3+ feet.
I am currently working on finishing the 2nd Battalion, and the commander of the regiment – the ruthless Colonel Peperkov. I am not sure whether to paint his uniform in the same colours as the regiment, or to give him a more individual look. Perhaps a nice lavender coloured coat might soothe his choler?

Posted by Vladimir odBlagovia at 21:48 2 comments:

Something from the past...

This weekend while I was looking through some of my old university texts, I found a wonderful treasure –an old  NATO map of Nabburg and its surrounding area. Carefully folded, and tucked into the front cover of  A History of Russia, by Nicholas V. Riasanovsky it lay forgotten for eighteen years. What is so wonderful about this you may ask? Well, on its own nothing, but in the context of Imaginations many things.

In the winter of 1999  I was an optimistic graduate student, a few years out of the military and in full academic mode, busily working on my thesis, and living a semi-reclusive life. What little free time I had in between research and TA'ing (is this a word?) was spent with either my then girlfriend, or the group of miscreants that I socialised with at the Graduate Student's Pub. At the pub, in addition to downing pints and smoking too many cigarettes, there was Nabburg. Although a real town in Bavaria, Nabburg became a Duchy for myself and two of my university friends. Carefully unfolding the map, we spent hours, over pints, detailing the lives of its many inhabitants, and telling each other stories that were made up on the spot. What was at first an "intellectual exercise" quickly degenerated into a cross between Baron Munchausen (yes he has a house in Nabburg) and Monty Python, with a lot of Blackadder thrown in as well. There was the Cabbage War of 1739 when Nabburg's neighbour, the Kingdom of Leutonia, led by King Schmenge himself, invaded the Duchy because of the tax imposed on all Nabburger Cabbages marked for export. As everyone knows, there is nothing that a Leutonian loves more than cabbage rolls and coffee, and he will do anything to get them! There was also the Battle of Rattenberg when a group of marauding Saxons somehow found themselves in Nabburg and proceeded to burn the  first village they entered, only to be driven away by a hoard of rats emerging from an abandoned mineshaft nearby that had drawn in the smoke from the burning buildings. The more absurd the better, and many a celebrity, or professor, or student found their way into our stories. Even the great Antonio Salieri (of course as portrayed by F. Murray Abraham in Amadeus) once thrilled Nabburg society with an impromptu concert when he got lost on the road to Vienna.

First and foremost there was Prince Heinrich von Hacker-Pschorr, of the Nabburg Hacker-Pschorrs, a distant and minor cousin of  the Habsburgs, a relation ten times removed to the Stuart kings, a knight of the Order of the Dragon, A Knight of the Holy Ram, a master of der alte Orden der Steinmetze, and the hereditary ruler of the Royal Duchy of Nabburg. There was also Konrad Krank, Grand Marshall of the Ducal Armies, boon companion of Heinrich, lecher and drunkard who once challenged Maurice de Saxe to a duel, only pass out stone-cold drunk a minute before the event was to take place. Maurice, being the gentleman that he was, felt that honour was satisfied when Konrad fell face first into a pile of mud and pig dung. Nor can we forget Stephan Schimpf, the so-called "Mad Monk of Mainz," Prince Heinrich's spiritual and scientific advisor, from whose chambers in the ducal palace strange sounds, and even stranger odours emerge with alarming frequency. He claims to have discovered how to transmute lead into gold, but has been ordered by the Almighty not to reveal the secret. There are whispers that he has a copy of the dreaded Krankenhammer, a book of vile darkness and demonology even more dangerous than the Necronomicon! There was also Haji Chan-Chan, the Prince's Blackamoor valet, interpreter, fixer and general dogsbody. Haji, who spent many years as an "honest sailor" in the Caribbean and the Americas is a named share holder of the Ostend Company, but for some reason cannot show his face in a British or Spanish port, and has vowed never to "go to sea again effendi."  Brother William, a Premonstratensian Monk (also known as Norbertines), who along with the venerable Brother Ubertino have been given Ducal Charters to investigate any crimes, and prosecute any criminals within the borders of Nabburg.

These characters, and many more, were created, or borrowed from literature, during that winter, and brought to life for a few short months. Although the creators of Nabburg may have lost touch over the years, the characters and the Duchy remains.

Having crossed the bridge into land of Imagination I think I will see about developing Nabburg with an eye towards war gaming. Back in "Ye Olden Dayz" (as my friend is want to say) all battles were simply resolved at the pub table with a d6 –I roll high I win, you roll high you win, we tie, then let's negotiate, or more often a coin toss. I think I will use a somewhat more sophisticated system. Furthermore, although Blagovia did not exist back then I will have to have them as an ally of Nabburg, and possibly a neighbour. Duke Borislav simply has to know Prince Heinrich! Certainly Leutonia, Nabburg's rival and sometime enemy, will play a prominent role in any future battles, as may the Turks of Totun-Bey.

Lets see what mischief Prince Heinrich has gotten himself into after all these years, shall we?
Posted by Vladimir odBlagovia at 04:53 No comments:


A very busy and long week in the Real World has left precious little time for the Imagi-Nation. This weekend should see me finish the Grenadiers and the basing.

In the meanwhile, here is another article from the June 8th edition of the Nova Iskra.

31 May 1736   Thursday in the evening a disorder of a very particular nature happened in Belo-street: ’Tis said that several young gentlemen of distinction having met at a house there, call’d themselves the Calf’s-Head Club; and about seven o’clock a bonfire being lit up before the door, just when it was in the height, they brought a calf’s-head to the window dress’d in a napkin-cap, and after some Huzza’s, and Hurra's, threw it into the fire: The mob were entertained with strong-beer, and for some time halloo’d as well as the best; but taking a disgust at some healths which were proposed, grew so outrageous, that they broke all the windows, forc’d themselves into the house, and would probably have pull’d it down, had not the Guards been sent for to prevent further mischief. The damage done within and without the house, is computed at some hundred lira. The Guards were posted all night in the street, for the security of the neighbourhood. These same gentlemen are said to be officers of the 1st Regiment, and did use their rank to have their way. Col. Peperkov was said to have found great mirth in their actions and has pass'd it off as youthful enthusiasm.  Count Esengorod was also similarly amus'd at the antics. Who will pay for the damages is not yet known. Lord Maslov  was overheard to say that the Duchy will pay for the damages "when Hell doth freeze." One wonders if  his response would be the same should it be his property that was damag'd?
Posted by Vladimir odBlagovia at 04:36 No comments:

The following article was in the June 1st edition of  Nova Iskra, Blagovia's only newspaper, whose editor is a constant thorn in his Grace's side. I thought I would present it  for your amusement.

15 May 1736   A female Gypsie trick’d a servant maid at Starigrad of three lira twelve dinari, by making her believe that she wou’d have a legacy of ten times that sum before Christmas; and that on the Wednesday following, under the small-beer tap in the cellar, there wou’d rise up a brick, under which by digging she wou’d find an iron box full of jewels, and gold. This the silly girl kept as a secret, till the Gypsie had time to make her escape. The sudden influx of these miscreants in Blagovia has led to an heretofore unseen level of crime and dishonesty. His Grace has, for reasonings unknown, allowed them to thrive and flourish. When His Grace's Minister of  Law was questioned as to why such criminality was encouraged by His Grace he did strike P. Pishov, the questioner engaged by the Nova Iskra, with a book and with such violence that blood did flow freely from his nose for some time. Lord Balaglava, the above mentioned Minister, also did land such a kick upon Mr Pishov's posterior that he is quite unable to sit with any comfort or ease. We have, of necessity, gone to the court house to issue a declaration of harm against the above Minister, and would sue him for fifty lira in damages and for the needless vexation he did cause. His Grace has not, as of the publication of this week's journal, issued any statement reagarding the actions of his minister. We wonder if His Grace did not secretly, or dare we say, encourage,  Lord Balaglava's actions? A date has not been set for the trial, although Mr Pishov is scheduled to appear in front of a magistrate in order to present his case.

Posted by Vladimir odBlagovia at 20:56 No comments:

The Troops are here!

Huzzah! Some pictures of the troops. I tried using my tablet this time, and I am a lot happier with the results. In the past I have been using a cell phone, and the pics were not the best. These ones still a have a ways to go, but are a vast improvement over last attempt.
What we have here is the 1st Regiment Blagovinski (1-й полк – Благовински). Although they surprisingly look like the Austrian IR. 52 Bethlen his Grace can assure you all that the resemblance is purely coincidental.
Of the two battalions that comprise the regiment, three companies, and two command stands are done. I have decided to go with a 37-figure regiment –four stands of six, two battalion command stands of six (ensign, drummer, etc.) and a mounted officer. All that is left to do is base the units, finish one last stand of six, the mounted officer, and print the flags. Not a lot of work really. Please let me know what you think. 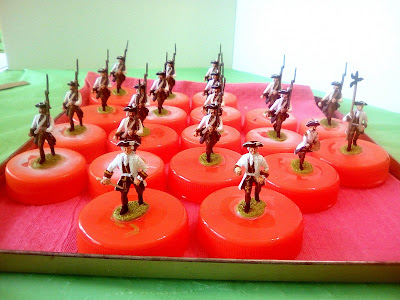 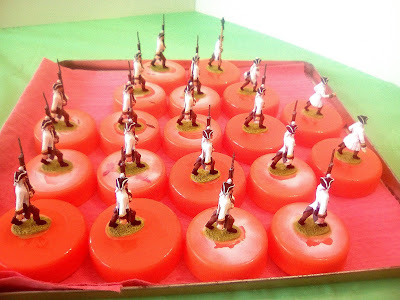 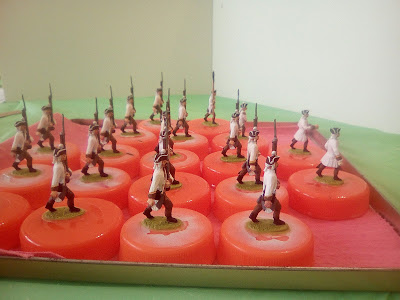 Posted by Vladimir odBlagovia at 18:15 2 comments: